The Asia-Pacific area on both sides of the Pacific Ocean often suffers from natural disasters that bring about critical economic losses and affect social stability. Such catastrophes occurred frequently in the Asia-Pacific region throughout 2018, including the wildfires in California and three hurricanes in United States, an earthquake and tsunami in Indonesia, another earthquake in Mexico, and various
typhoons that attacked Taiwan and Japan (please refer to Figure 1), resulting in approximately US$150 billion in global economic losses. The reinsurance company settled about 51% of the claims, while Taiwan has to pay a significant amount of foreign reinsurance this year.

Some countries or areas with high catastrophic risks, such as Japan, have the ability to respond to the huge losses caused by natural disasters. However, other countries that lack an insurance market or are unable to insure such risks face potentially enormous economic losses (please refer to Figure 2). In such conditions, the government must promote effective Disaster Risk Finance policies to sustain
Financial Resilience as a necessity for responding to catastrophic risks and further encourage cooperation between public and private sectors to promote catastrophe insurance and jointly apply capital market power or to even establish cross-field cooperation to ensure economic growth and development. 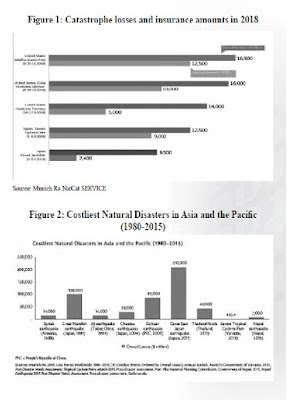 Primary Models of Catastrophe Insurance Established in the Asia-Pacific area

Since the social systems, economic development, degrees of insurance market development, disaster support systems, and geographic environments different greatly among the countries in the Asia-Pacific region, the physical designs of all of these countries for catastrophe insurance systems also vary. Nevertheless, they can all be categorized into the following three models:

The first type is led by the government: the country’s government provides a financial subsidy rate and federal tax exemption for most catastrophe insurance items. When the flood insurance fund has a deficit, the government will ask for national finance provisions. The U.S. “Flood Catastrophe Protection Act” is an important reference for us.

Most countries in the Asia-Pacific area integrate the government force with market functions, but they may take different cooperation styles and major focuses. The major function of government is to solve the “market failure” problem of catastrophe insurance through policies, funding, and disaster and loss prevention facilities. Meanwhile, the market mechanism develops the advantages of commercial insurance with regard to professional technology and risk distribution to increase the protection provided by the catastrophe insurance system and its operational efficiency.

In order to help important member countries in the ASEAN, to rapidly acquire disaster rescue funds after encountering a natural disaster, the finance ministers of Japan, Laos, Myanmar, Singapore, and Cambodia held talks at the 21st meeting of finance ministers and governors of central banks of ASEAN, China, Japan, and Korea (10+3) in 2018 and jointly agreed to set up the Southeast Asia Disaster Risk Insurance Facility, or SEADRIF. Japan would be responsible for such insurance fund in the preliminary stage and the World Bank would offer the technical consultation due to its rich experience with assistance regarding reconstruction. After official operation began in June this year, benefits will be paid depending on the rainfall during the flood period so that member countries can quickly get compensation for reconstruction.

Natural disasters frequently occur in the Asia-Pacific area, which may result in significant threats and impacts especially by catastrophes. In response to huge losses, one of the aforementioned models can be adopted. However, the catastrophe insurance system must be based on complete legal protection and the proper operation and management of a catastrophe fund. In addition, the public and private sectors can join a risk sharing mechanism of catastrophe information through accessible policies in order to minimize the huge losses of disaster. As for the Cat Bonds issued by the public sector, governments must undertake their complexity and pricing mechanism. Derivative instruments issued by the private sector need to face the supervision of the public sector. While establishing cooperation between the government and private sector for catastrophes, applying the geographic and
potential disaster information from public database, effectively controlling risks and estimating the financial needs for disaster losses in advance, and reinforcing the role of the private sector to innovate risk transfer tools are the potential responding resolutions for future catastrophes in the Asia-Pacific region.


(The author is assistant researcher of Taiwan Institute of Economic Research)