Implications of the US and Japan's Smart Agricultural Experiences


Conception of the US's smart system helps with fooddevelopment systems

The United States is a world leader in advanced agricultural technology, using its large scientific research system to help agricultural production and exports. As the wave of intellectualization has reached agriculture, the US government has provided relevant supports to the smart technologies, equipment, and systems needed for the sustainable development of US agriculture through agricultural laws, the expansion of agricultural research departments, and the provision of funding.

According to a speech by Dr. Sonny Ramaswamy, former head of the National Institute of Food and Agriculture (NIFA), regarding "Smart Systems for 21st Century Food Systems," he suggests that the American smart system can help with the development of sustainable agriculture. Furthermore, he
considers that the so-called concept of smart agricultural production can improve the profitability, productivity, and efficiency of agricultural operators of various scales through accurate sensing, reasons, and responses. At the same time, such a concept aims at meeting the needs of the new development goals of consumers and society, including new or improved engineering equipment, products, or systems projects that can achieve a sustainable agricultural system. As a result, these smart systems will primarily be used on the grain production system, including such aspects as the application of new technology development, genotypic and phenotypic screening, big data management, breeding of diverse and ideal crop varieties, and harvesting and distribution to the consumer (Figure 1). In general, technology and information will be integrated to realize a smart production system from the farm to the dining table to improve the supply and demand quality of foods. 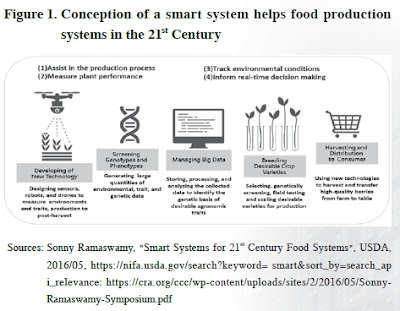 The promotion for industrial intellectualization started in Japan with the "Basic IT Law," with the government's promulgation of the "Creation Declaration of the Most Advanced IT Country in the World" in 2013. Later, all aspects of those crucial areas fully advanced towards such an IT policy, while the agricultural sector has also actively promoted "smart agriculture." According to the conference information concluded at the fifth meeting by the Research Society for the Realization of Smart Agriculture from the Ministry of Agriculture, Forestry, and Fisheries of Japan, the "Future Development Context of Smart Agriculture" should generally embrace the following five major aspects: (1) achieve ultra-saving and large-scale production; (2) push crop outputs to the maximum limits; (3) reduce hard work/dangerous operations; (4) empower anyone to easily become an independent farmer; and (5) provide peace of mind and trust to consumers those in need. 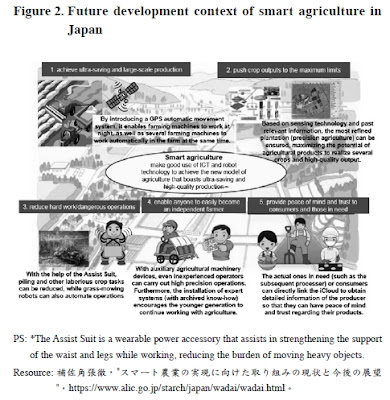 US and Japan evaluation of the smart agricultural development effectiveness indicator

According to current official data, the United States and Japan do not yet have any systematic assessment indicators regarding the effectiveness of smart agriculture, so we can only appreciate their important policies and administrative contents. For the United States, we primarily learn through related information provided in speeches made by the head of the United States Department of Agriculture (USDA) and the National Institute of Food and Agriculture (NIFA), annual implementation and budget reports, strategy notes and related briefings, and the Agriculture and Food Research Initiative (AFRI) and can obtain information from relevant performance-related extraction and inference. As for Japan, the scheduled goal of implementation or KPI on the administrative level (such as the Creation Declaration of the Most Advanced IT Country in the World, Japan's re-emergence strategy) and important relevant survey results (such as IT profit utilization and promotion survey) are used to extract performance-related information (Table 2). 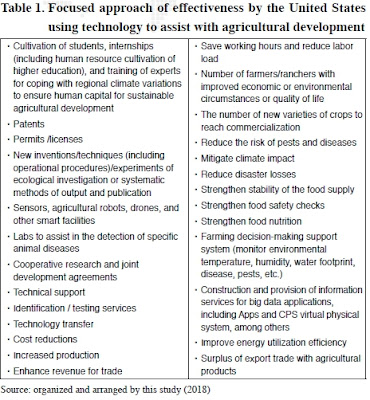 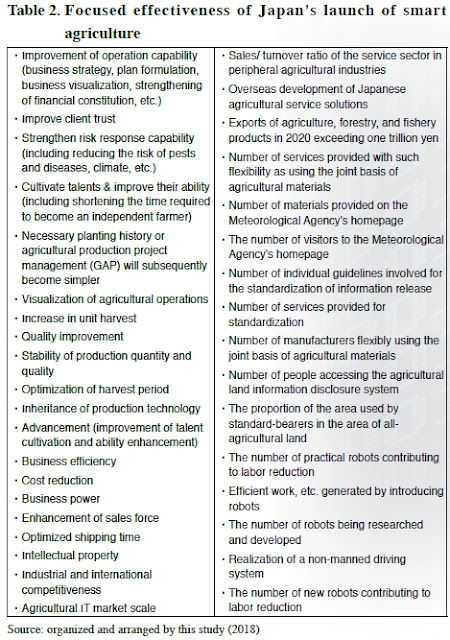 The US and Japan's purposes with regard to applying science and technology to agricultural development are mainly to help improve efficiency, quality, and sustainability, achieving such through sensors, smart aids, robots, drones, ICTs, IoT, and big data, among others. In terms of the achievable effectiveness anticipated for agriculture through intelligent expectations, the focused aspects of effectiveness in these two countries related to their development ideas and overall goals have largely worked in concert. The United States has focused on helping the sustainable development of American agriculture, emphasizing the cultivation of agricultural talents, operating environment of the industry, overcoming extreme climate issues, and improving food security. Meanwhile, Japan has focused on direct and substantial benefits to the production and business aspects of the industry, medium- and long-term output value of the industry, and the development of start-up industries, as well as increased export value.

The development of smart agriculture in Taiwan is quite similar to that of Japan. In 2017, the Council of Agriculture of the Executive Yuan launched the "Outline Program of Smart Agriculture" with safety, efficiency, and low risk as its goals, which shall be primarily achieved through smart production and digital services. The allied power of government resources is assisting agriculture through smart production and management, demonstrating field promotion and alliance operations to break through the dilemma of small farmers fighting on their own. Furthermore, the government has planned for the integration and development of a common platform for agricultural big data to promote the acceleration of Taiwan's agriculture towards smart development. In the process, Taiwan, like the United States and Japan, has attached equal importance to improving both efficiency and quality and is emphasizing the three functions of agricultural life, production, and ecology, as well as being friendly to the environment through the reduced use of water resources and pesticides. Therefore, Taiwan's approaches for effectiveness and attention are largely consistent with those of the United States and Japan. However, greater efforts can be made toward strengthening sustainability and overcoming extreme climate, as well as the research and cultivation, training, and observation and promotion of achievement with outline projects for student, farmers, and operation in topics related to smart agriculture, so that they can become the smart and sustainable seeds of agriculture in Taiwan.

Acknowledgement
This paper was supported by the implementation of the Performance Management and Industry Trend Analysis of Intelligent Agriculture 4.0 Project under the "Commissioned Project by the Council of Agriculture, Executive Yuan," (106 Agricultural Section - 18.2.3 - Section - a1).
張貼者： CTPECC