This year, Mr. Morris Chang, founder of TSMC, attended the APECLeaders Meeting on behalf of the president. Morris Chang is considered as having the highest level of digital knowledge among all the other APEC leaders. Furthermore, the Chair's Era Kone Statement provides the characteristic digital opportunity blueprint in the Asia-Pacific region for digital economic development, particularly with the APEC Action Agenda on the Digital Economy, which encourages APEC economies to actively master digital opportunities.


Since taking office, the Trump administration has disrupted the rules of the global trading system, with the primary appeal of the United States to participate in APEC is the pursuit of "free" and "fair" trade, which has nearly destroyed the APEC Leaders Declaration from last year. In fact, the call to reform the multilateral trading system has not stopped since the stagnant period of the Doha-round negotiations. Recently, representatives from the United States, Japan, and the European Union proposed a plan for WTO reform, which would require the WTO to impose penalties on corporate subsidies in various member states. Furthermore, countries with domestic corporate subsidies and their governments that have missed the deadline for submitting reports to the WTO for more than two years will have to submit fines to the WTO and would be forbidden from serving important public offices of the WTO. Member states that have not submitted their reports within one year will be suspended from participating in the WTO and banned from expressing views at the WTO meeting. As a result, the United States, Japan, and Europe have vehemently joined forces to promote WTO reform and propose specific action plans. After all, returning to the era when rules and regulations with international economic and trade were not yet established is difficult, whereas governance based on rules of operation is better than nothing.

In addition to US-China relations, another major point of the APEC Leadership Conference is the “APEC post-2020 vision,” which plans to strengthen regional economic integration (FTAAP) and review Bogor Goals progress and the digital economy. Therefore, 2020 is an important year for APEC. In addition to the Bogor Goals, other scheduled work plans include the APEC Food Security Road Map towards 2020, the APEC Services Competitiveness Roadmap, and the APEC Connectivity Blueprint, all of which will also be reviewed or completed.

Since proposing the Bogor Goals in 1996, APEC has been profoundly involved in the liberalization and facilitation of convenient trades and investments, thus becoming the representative of regional economic integration. According to the WTO report, trade control measures of the APEC regional trade environment have increased from 58.6% to 64.1% during the period of October 2015 to May of this year, while trade facilitation measures have decreased from 41.4% to 35.9%. Therefore, whether the vision of liberalization can be achieved one year before the Bogor Goals mature needs to be reviewed. Therefore, when the Bogor Goals mature, members states will learn how they can make trade more liberal, conduct FTAAP under APEC framework, implement trade facilitation within the
WTO, and promote digital economy, among other issues. 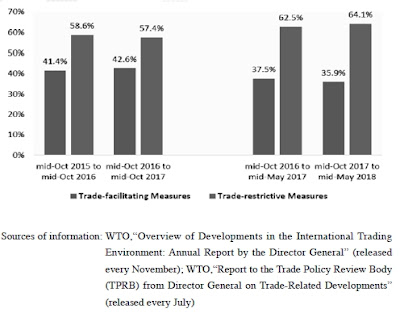 As we think about the APEC post-2020 vision, we must not neglect that the crux of future economic growth in the Asia-Pacific region relies on industrial transformation led by the digital technology, which will expand economic scale with spillover or proliferation to the department of digital beneficiaries. In fact, the Internet revolution and digital environment have brought about a lot of innovative activities, profoundly influencing both economic and social aspects. Furthermore, contributions by digital products and services to economic growth have been increasing so much that they have become the priority for countries to plan for future economic strategies, including the UK's Digital Strategy 2017, Germany's Digital Strategy 2025 Programme, Japan's Creation Declaration by the Most Advanced IT Country of the World, and Singapore's Infocomm Media 2025, among others.

The Asia-Pacific region has already marched towards the digital technology era, including new business models, new technological revolutions, inclusive growth, and sustainable development. According to reports by Jakarta Globe, if SMEs in the ASEAN countries can collectively grow as a region instead of pursuing their own growth in resolving trade barriers and improving digital infrastructure, the growth of their GDPs should be able to increase from 200 billion US dollars to 1 trillion by 2025.

In fact, the predecessor of digital economic issues evolved from e-commerce. In the 1970s, such technologies as electronic data exchange and electronic deposit transfer enabled commercial documents like purchase orders or invoices to be transmitted in digital form, while also serving as the origin of e-commerce. By 2000, many European and American business operators had already begun offering goods and services through the World Wide Web. Many international organizations, such as the OECD, G20, and WEF, have recently expressed their opinions on the current status of global economic governance. As for APEC, it included digital economy as a priority issue for the first time last year, with a focus on how SMEs can enhance competitiveness and innovation in the digital age, and passed the APEC Internet and Digital Economy Roadmap network, as well as promoted the cross-border e-commerce structure at the APEC Leaders Meeting. In recent years, it has further echoed the vision of the APEC host country, Papua New Guinea, of "Master Inclusive Opportunities, Embrace a Digital Future," and it is properly convinced that many more digital economic plans of action by APEC can be put forth in order to extend that momentum.

New trends in the Asia Pacific region and around the globe have affected the role of APEC. In fact, APEC should become a global digital economic governance platform so that everyone can achieve digital growth opportunities, while guiding inclusive digital growth and strengthening digital resilience and literacy. In the digital technology era, APEC can serve as a policy platform for digital governance in the Asia-Pacific region as we test the response speed of public services and regulatory systems, such as the proposal of cross-border privacy rules for promoting digital trust in the Asia-Pacific region. On the other hand, APEC economies experience a digital disposition difference and digital transformation gap due to an insufficient digital infrastructure and digital capabilities, thus hindering digital economic development. Therefore, by lowering digital trade barriers through
reconciliation and consistent standards, the digital trading environment can be rendered more transparent, and the entry threshold for SMEs can be decreased. Furthermore, APEC should strengthen the cooperation between digital resilience and literacy so that the general public and laboring people can master the necessary skills through training of the relevant digital intelligence to shorten or reinforce the adaptive ability of digital transformation and fully grasp digital work opportunities.