The ASEAN Economic Cooperation (AEC) and its New Opportunities

AEC, also known as ASEAN Economic Cooperation, was adopted to enhance trade development, economic growth and the concept of free market within the region. By integrating into a more closely community, it is believed that the stability and fundamental prosperity can be achieved in the future years. Indeed, according to the ASEAN Vision 2020[1], ASEAN nations would like have comprehensively free movement of goods, services, investment, skilled labour and capital by 2020. By doing so, the 600 millions population and 4.5 millions square kilometers area will be considered as a single market with increasing supply and demand. Thus, it is essential to understand both opportunities and challenges in this regional partnership[2].


Figure 1: The member states of AEC. 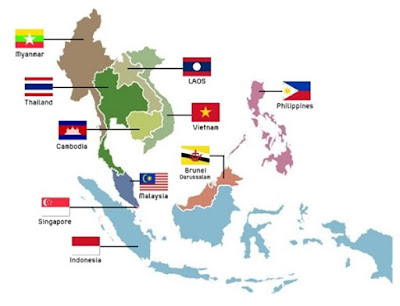 Since the lack of progress of WTO negotiation, more and more bilateral / multilateral free trade agreements have been approved between economics. The recent trend targets a new era that the global economic integration has been shifted from world-level participation to the regional integration. Such as TPP, RECP or ‘one-belt-one-road’ program have implemented their own ambitions and tried to reshape regional trade rules, in particularly, the Southeast Asia becomes a place that everyone would like to join the competition.

As a region, ASEAN has implemented its export-oriented policy for a long time. By leveraging its competitive advantages (cheap workforce and raw materials), ASEAN countries play an important role in Asian/global supply chain. Furthermore, the region also provides relatively cheap labours and abundant resources attracting foreign investment. In early stage, such as automobile, manufacturing, textile or machinery, etc. can be found as major industries in many countries. The export processing zones (EPZ) have been designed to service and engage these factories producing in the region and selling to the foreign markets. Thereafter, the export-led growth contributes a lot in GDP per capita and many other tangible benefits to ASEAN people.
Although the export revenue is still important for most ASEAN countries, the establishment of AEC symbolizes a new era that the region is going to transfer its economic form export-led growth to demand-driven market. The raising middle-class, dynamic young population and changes of consuming behaviors stimulate new domestic market, innovation and intra-ASEAN trade. Indeed, the increasing purchasing power in ASEAN provides many opportunities for investment that haven’t be considered before. For example, the ‘ASEAN 4.0’ plan, which initiated by Thai government in 2014, is going to build region a produce-based center with technology-and-innovation-led growth. Moreover, the investment in advanced industries, such as high-end medical service, renewable energy, smart grid system, health and education services, can also foster sustainable growth, creating a virtuous cycle among development, job creation and labour productivity.
It can be seen that the domestic and regional factors play a larger role in driving growth in ASEAN region. In the past, member states were vulnerable to external shocks due to their excessive reliance on export[3]. However, as mentioned above, the goals of AEC aim at enhancing its competitiveness and labour productivity by utilizing its growing population and transforming economic power. In order to strengthen its productivity and higher living standards for its citizen, ASEAN put lots of efforts on encouraging high value-added activities, in both service-related industry and technology-driven innovation. Such as e-commerce, fintech, intelligent manufacturing and virtual reality, etc. have been prioritized in the development agenda. For instance, in Thailand, internet banking, mobile users, and E-payment have been observed increasing and become more acceptable in the society. It is important to understand that the knowledge-intensive development strategies allow ASEAN countries to catch up existing capabilities from advanced ones.
Also, in the AEC agenda, the ideas of liberalization, sustainability and inclusiveness have been adopted by most of ASEAN governments. In terms of cross-border trade, the advanced technology, reduced transport costs and closer connection have enlarged the scale and increased growth for the regional economics. The openness and inter-governmental cooperation have also speeded up tariff liberalization and created welfare for trading partners. As we can see in the recent ASEAN Summit in 2015, the ASEAN country leaders affirmed their strong commitment to stimulating the establishment of free trade area and accelerating the deregulation of goods, services and finally, the totally free movement of capital and labour. Although it still needs more negotiations and compromise to achieve these goals, the progress with respect to the removal of trade and investment barriers is optimistically predictable.

In sum, the formation of AEC signals a new economic integration in Southeast Asia. It provides opportunities for investment and doing business, not only in traditional manufacturing areas and export-oriented industries, but also the demand-driven services and technology-led innovation. While the increasing labour productivity, transforming economy and more open trading environment have formated a borderless domestic market, both public and private sectors should shift their focus on the industries that create higher value-added and customer-oriented benefits.
In the 2015 World Economic Forum, participating academics argued that AEC will boost the region’s economies by at least 7.1 % in the next decade, and it can also generate 1 million jobs in those innovative workplaces[4]. The application of technology, for example, using big data as a management tool for business, can flourish new sectors and allow more small and medium-sized enterprises (SMEs) enter the AEC market. In addition, it also requires related policies to support this structural change, which can generate shared prosperity for all members within the region.
A highly integrated, dynamic and cohesive economy might unleash significant potential in different industries and new opportunities will bring the tremendous advantages to all participants in ASEAN. In line with the endeavors conducted by all sides, a more concrete cooperation can be anticipated and both companies and policy makers should have new development strategies to maximize their welfare and profits.


Figure 2: The goals of AEC 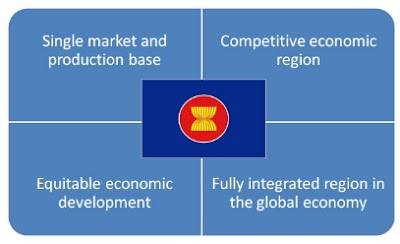 
(Jack Huang is a consultant at UN Office of Information and Communication Technology, OICT)