“New Southward” Is Another Political Slogan or Is a Comprehensive Strategy?


ASEAN Economic Community, also known as AEC, was officially announced by the end of 2015. Most people consider it as a milestone of regional integration in Southeast Asia and it seems that the prosperous growth in near decades between member states is foreseen. In this prediction, the foreign direct investments (FDI), in terms of net inflow, intra and extra ASEAN, are increasing and therefore stimulate economic growth in the region. Furthermore, the closely cooperation of AEC also aims at creating single market and production base, achieving free flow of goods and services, reducing burdens of labour and capital movement. In a long term, it may follow up the course of European Union and many expects even assert that ASEAN will become the third-largest economy in Asia, and the sixth in the world. 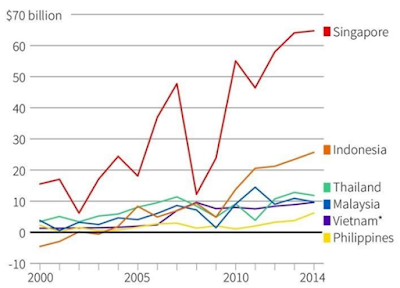 Source: UNCTAD, cited from ‘The ASEAN Economic Community: what you need to know’, World Economic Forum.
In this awareness, Taiwan, as a country with high degree of dependence on foreign trade, must build connection with his fast-growing neighbours and extend bilateral partnerships among different subjects. Therefore, ‘New Southward’ has been initiated as a key policy since Democratic Progress Party (DPP) took power in 2016. It is different from the old ‘Go South’ policy launched decades ago, which mostly focused on export-oriented industries and low value-added production, such as Original Equipment Manufacturer (OEM) and primary industries. The ‘New Southward’ has a more ambitious blueprint comparing with the previous version. It wants to establish the comprehensive cooperation among many issues, not only in trade and investment, but more in education, culture, research and other types of exchanges.
In order to build a closer tie with potential ASEAN partners, the major economies around the world have shifted their attention to focus on the development in this region. Several free trade agreements (FTA) or regional trade agreements (RTA) have been signed and put into effect in recent years. Evenmore, the integration around the Pacific Basin is negotiating on the table, not the TPP, but the new-launched ‘ASEAN-Pacific Alliance Framework for Cooperation’ in March 2017. The new Asia-Pacific partnership combines 10 ASEAN countries on one side and another 4 countries in Latin America (the Pacific Alliance includes Chile, Colombia, Mexico, and Peru). While the acknowledgement of global transition moves toward to Asia and the Pacific, Taiwan, however, does not be involved in most of those regional frameworks. So far, the officially trade agreement signed with ASEAN states can be seen in Singapore-Taipei FTA only, and most Taiwan’s exports and imports are excluded from the most-favoured nation (MFN) treatment within the region.
According to the information provided by the Bureau of Foreign Trade, ASEAN can be regarded as the second largest trade partner behind China. In January 2017, the total exports from Taiwan to ASEAN countries were about 4.5 billion USD and the imports from ASEAN were about 2.2 billion. If we check the historical data, the figures show an increasing trend even though the official relation is progressing slowly. In fact, many sectors invested by Taiwanese have been operated for decades in ASEAN area, even longer before the previous ‘Go South policy’ period. Why is that? One senior manager, who has been in Thailand more than 30 years, pointed out ‘the business is always the pioneer and should take action before bureaucracy’. Indeed, opportunities and challenges are everywhere, not just in the media-alleged booming ASEAN, but even the advanced countries can provide a proper investment environment for doing business. ‘The key points are to find a niche market initiatively and generate the irreplaceable product or service, not to rely on government policy and follow the road paved by someone else’, he mentioned.
Nevertheless, the ‘New Southward’ policy still has its effect to give useful guideline and help for investing ASEAN. If the obstacles lay on the official channel, Taiwan still has plenty of ways to develop bilateral relationship with other trade partners. For example, the Taiwan External Trade Development Council (TAITRA) or the Taiwan International Cooperation and Development Fund (ICDF), have acted as an intermediary for a long time to contribute in some areas that government is not available to reach. The TAITRA has cultivated local market and promote foreign trade in many countries, it also provide investment consultation and collaborate closely with government. The ICDF, on the other hand, is dedicated to enhancing and supporting cooperation in not only economic development, but more in education, humanitarian assistance, agriculture and public health with many under-developed countries. Both of these non-governmental organizations can play a more active role in facilitating ‘New Southward’ proposal, and the civil power in Taiwan can be utilized to seize the opportunities in ASEAN region.
Besides, trading and investing in ASEAN need to think in an alternative way from the traditional strategy as well. The conservative thought focus on export processing industries and neglect the domestic demand in ASEAN. In the region with emerging middle class, the increasing require of consumption goods and services, and the a highly integrated economy for all member states, Taiwanese businesses have to expand local markets and try to target the local needs. The policy makers, then, need to have a comprehensive view to bridge network with local talents and provide more updating information. In addition of short-term economic-oriented goals, Taiwan should make more efforts in understanding ASEAN countries deeply, building a long-term development, and as a result, achieving sustainable relationship.
In sum, the civil exchange and non-official activities should pay a more important role for New Southward policy. In the past, the obsession of economic growth encouraged business to devote most of their resources in primary or secondary sectors, but these business models cannot guarantee high growth anymore. Therefore, it is utmost importance that ‘New Southward’ policy is implementing under the great understanding of ASEAN and both government and private sectors have to realize that ASEAN is not just a pool of cheap labour, but it needs to be respected as an emerging market with growing population and increasing knowledge-based productivity.
(Jack Huang is the Consultant in United Nations Office of Information and Communication Technology, OICT)

The ASEAN Economic Community: what you need to know
https://www.weforum.org/agenda/2016/05/asean-economic-community-what-you-need-to-know/
The Real Trade Challenge for Taiwan and Tsai Ing-wen
http://thediplomat.com/2016/06/the-real-trade-challenge-for-taiwan-and-tsai-ing-wen/