Asia-Pacific Cooperation in an Era of Rising Anti- Globalization


Asia-Pacific economic cooperation is at a crossroads. From its roots in the mid 1960s it has been underpinned by a drive towards deeper economic integration. That intellectual foundation has been challenged by the failure of the TransPacific Partnership to come into force which has been interpreted as symptomatic of a discontent towards globalization evident in the 2016 US presidential and Brexit campaignl. It remains to be seen whether this is a transition phase or if it is in inﬂection point in the process with economies turning inwards and eschewing the benefits of deeper integration.


The latter would have seismic repercussions on economic policy throughout the world but especially the Asia-Pacific. Some may see recent events fatalistically but there is much the region can do to avoid a slide into tit-for-tat protectionism. Evidence of the ability of governments to keep momentum going was evident in March in Manila with the announcement of an attempt to restart the ASEAN-EU FTA2 negotiations. This initiative should trigger a deeper examination of where various economies stand with respect to how they benefit from the trading system. If successful, the deal would bring together Europe with its technologically advanced companies together with rapidly growing middle-income Southeast Asia. This is not to forget the very significant progress being made in Pacific South America with the Pacific Alliance or moreover, the progress being made with the Regional Comprehensive Economic Partnership agreement that would consolidate ASEAN's Plus One FTAs into a single accord.


Although the Brexit campaign and result is often cited as evidence of the malaise towards economic integration, subsequent actions by the UK government point to the need for a more nuanced understanding. At a meeting of Trade Ministers of the Commonwealth, UK International Trade Secretary Liam Fox stated that "It is the government's intention to make Britain a leader in free trade, working with our friends and allies in the Commonwealth to remove barriers and liberalise the glob al trading environment. The trade ministers' meeting is an important step towards realising this vision and I'm looking forward to strengthening foundations today for our trading future." This is a far cry from any kind of anti-globalization or anti-trade sentiment that was expressed during the Brexit campaign.


The EU-ASEAN decision, provides an important counterpoint in the debate over the next steps in globalization and integration narrative. While expressing caution over uncertainties arising from "growing protectionist and inward-looking policy stances" that often blame trade for the loss of jobs because of automation and industrialisation, EU Trade Commissioner Malmstrom told reporters after a meeting of economic ministers from both regions. "Closing borders and building walls, raising tariffs -- that will not be a solution, but will rather reinforce the problems." While further liberalization may be difficult given the political atmosphere around trade
issues, core economic interests need to be considered.

The rise of the Asia-Pacific has been understood in a geo-economic sense to come with a shift in the centre of gravity of the global economy from the Atlantic to the Pacific basin. While the post-1945 order was based on a common understanding and commitment to international institutions and norms, some argue that the shift to the Pacific Century has initially lacked such characteristics3. Instead, Asia-Pacific cooperation has proceeded on the basis of shared interests. To provide insights into those shared interests converge around specific policies, since 2006 the Pacific Economic Cooperation Council has been undertaking an annual survey of the regional policy community.


PECC's survey results provide some details on the concerns about globalization but also insights into ways in which integration processes can be improved to ensure that the next phases of growth are more inclusive. However, an additional complexity in understanding the current discourse over trade policy and structural changes in economies is the extent to which trade is responsible for the change and how much is due to rapid technological shifts.


As seen in chart 1, while it took the telephone 75 years to reach an audience of 50 million users, it took the internet just 4 years. While the change that took place with the industrial revolution 2 to 3 generations to reach a critical mass, adjustments today are taking place within an individual's working life. In short, economic policy is challenged not just by the globalization and integration but by a dramatically shorter technology cycle. 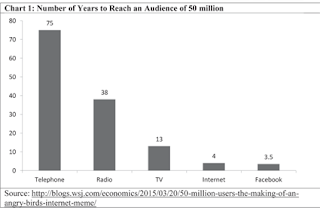 The Asia-Pacific's commitment to economic integration has served the region well. Since 1989 when its primary economic policy process, APEC, was founded, the average income per capita (in current US$) has risen by over 200 percent from US$5090 to over US$15,000, much better than the global rise of 160 percent. This has not been limited to emerging economies, for example, in the United States the GDP per capita has gone up from US$23,000 to more than US$55,000. The underlying question therefore is why is there a sense of anxiety over globalization?

PECC's 2016 survey on the State of the Region sheds some further light on the challenges facing trade policy and especially regional trade agreements. As shown in Chart 2, while 71 percent of respondents thought that the Free Trade Asia-Pacific, if it were to be achieved would have a positive impact on their economy, only 51 percent had a positive view on the political environment for freer trade in the region. The disconnect between assessments of the political economy of trade and the FTAAP was deepest in North America, while 78 percent thought such an agreement would a positive impact on their economies, only 43 percent thought that the political environment for trade was positive from their perspective. 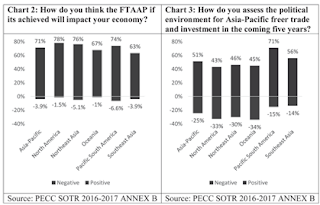 Two key findings emerge from the survey results: all the factors given were thought to influence attitudes towards trade; and that respondents from more advanced economies gave higher scores to all factors (except for slower overall economic growth) compared to their counterparts from emerging economies. This survey findings point to some important actions that governments around the region need to take: better communicate why trade and investment is important; the importance of sustained political commitment to trade but critically to also the need to address concerns about rising income inequality and job security. Moreover, respondents in advanced economies rated labor market issues such as rising income inequality and job anxiety as having a bigger impact on attitudes towards trade than their counterparts from emerging economies. 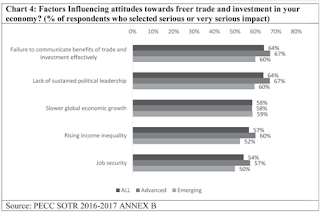 In the aftermath of the Global Financial Crisis of 2008-2009, APEC leaders endorsed a strategy to make growth more Balanced, Inclusive, Sustainable, Innovative, and Secure. This has resulted in a number of APEC initiatives focusing on these growth attributes, in particular to help address inequality work to ensure that the micro and small and medium enterprise (MSMEs) are able to better benefit from globalization. While much of the growth in trade in recent years has been through global value chains led by multinationals, technology, in particular ecommerce platforms provide a way for small firms to reach the global market. Evidence from some platforms suggest that an enormous leap in net profit margins from around 5 percent to over 54 percent if firms are able to use ecommerce4. This potentially changes the game - levelling the playing field for smaller firms with significant positive distributive gains.
The Future of Economic Integration in the Asia-Pacific
While technology may well provide a way to level the playing field and enable smaller firms to reap the benefits of globalization, it remains unclear, given the political economy of trade policy, whether the system can be sustained and eventually evolve into a newer more inclusive form of globalization. A more inclusive phase of globalization would be ideal. Should economies turn inward and adopt protectionist measures the costs would be high – most likely lose-lose scenarios. For instance, Dr Ken Kawasaki, co-chair of PECC's Global Economic Partnership Agreement Consortium estimates that if the US imposes import tariffs on China, US real GDP estimated to decrease by 1.72 per cent under a 45 per cent import tariff imposed on China.
These survey findings support the general narrative that, for the time being at least, emerging regions are likely to continue to with the trade integration initiatives. The very positive views of the political economy of trade in both Southeast Asia and Pacific South America certainly point to this. The aforementioned announcement to try to restart the ASEAN- EU negotiations is also a positive sign. Much hinges on the Regional Comprehensive Economic Partnership negotiations that brings together 10 member ASEAN with China, Japan, Korea, Australian New Zealand and India. Not yet mentioned are the ongoing EU-Japan FTA negotiations – which have also set 2017 as the deadline for completion which, if completed, would be a systemically important rule making deal.
Beyond immediate concerns over the future of trade deals, some deep thinking is needed on the future course of globalization. As much as trade deals are not the cause of all of today's problems, neither are they a panacea. Trade policy needs to be put in its proper context – overall economic policy frameworks. APEC's broad agenda and non-binding nature make it an ideal process for addressing concerns arising over globalization. Much of that work will be in improving the structural efficiency of regional economies especially the ability of labor markets to deal with changing competitiveness of sectors within economies. APEC already has work in this area which could help to define the next phase of globalization.
(Eduardo Pedrosa is the Secretary General of the Paciﬁc Economic Cooperation Council)